Many of the G.O.N.E.R.S. Crew investigations occur on land that was once home to tribes of Native Americans. While we have not knowingly encountered spirits of Native Americans in our research, we have wondered how the lives and rituals of these previous residents affect present day paranormal activity. Sometimes, there does seem to be a correlation between the two, almost as if the energy from the Native Americans somehow amplifies or triggers present activity.

Clinton, Connecticut, is a typical shoreline, Connecticut town. Situated on Long Island Sound, about twenty five miles East of New Haven, it is a mixture of old and new. Once a busy seaport and home to ship building and merchants who imported goods from as far away as India and China, today it serves as a "bedroom town" for some of Connecticut's larger cities and the vacation homes of many New Yorkers. 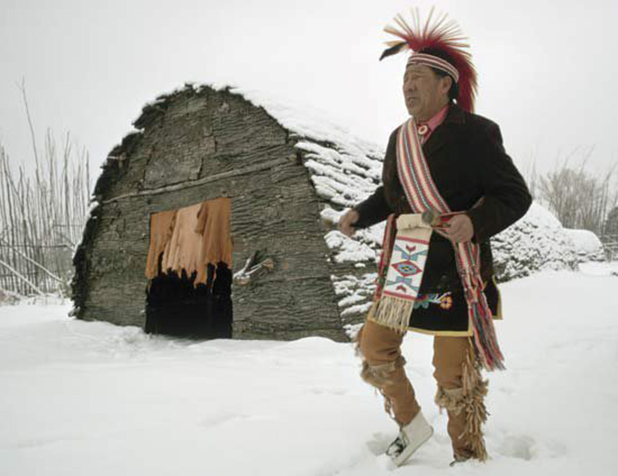 Prior to the arrival of the English and Dutch settlers, the land was home to the Hammonassett Indians, who camped and fished on the beaches of Long Island Sound in the Summer, and moved a few miles inland, up the Indian River, in the Winter months to the location of Airline Road, now the home of the Lebert family.

Carrie and Mike Lebert bought their home in 2003. With two young girls, it was the perfect setting for children. Heavily wooded behind the house with a large level yard, the girls would have plenty of room to play.

Once, while playing in the woods, the girls uncovered a large bone. They brought it to the house to show their Mom, Carrie, who is a Registered Nurse. She said it looked like a human femur and told the girls to put it back where they found it. Aware that the area was once home to an Indian Tribe, she thought it must have been part of an Indian grave and didn't want the girls to disturb it. She remembered that the contractor who had built their house had mentioned finding bones in the area that he suspected were Native American.

Shortly after, they noticed some odd things happening. Lights would turn on and off by themselves, once in a while, the sound of footsteps could be heard on a staircase coming up from the basement. They passed off this activity as the house settling and something wrong with the wiring that they would have to get checked, someday.

As the Lebert girls grew, so did the odd activity in the house. It seemed to be focused on the older of the two girls. Macy is a beautiful young woman of 19 who was a very good student and athlete, excelling at soccer.

In recent months, Carrie has awakened and heard voices coming from Macy's room. Thinking that Macy had fallen asleep with her radio on, Carrie would go into Macy's room and the voices would stop. The radio would not be on. This happened many times and the sound of footsteps on the stairs was becoming more frequent.

Macy also experienced strange noises coming from her closet and the light would turn on by itself. Once when she was home alone, she heard a loud crash in the basement and went to investigate. She didn't see anything that could have fallen but as she stood in the basement, something whispered unintelligible words directly in her ear. She fled the house, panicked and would not return until her parents arrived home.

One Saturday morning, Mike arose early to go with a friend to New Jersey. A few minutes after he left the house, Carries says that he came back to bed and told her, "It's raining too hard, we're not going." Just then, she saw the apparition of a little girl, about 6 years old, walk into their bedroom and disappear through the wall. She turned to Mike and said, "Did you see that?" But Mike was not there. Carrie insists she was not asleep and dreaming. She ran through the house looking for Mike but he was nowhere to be found. Carrie grabbed her cell phone and called his number. When he answered, she shouted into the phone, "Where are you?" Mike answered, "What do you mean? I'm on the way to New Jersey with Tony."

The G.O.N.E.R.S. Crew has found that reports of Doppelgangers are not unusual in houses with extreme paranormal activity.1

Carrie Lebert contacted G.O.N.E.R.S. and we agreed to meet on the following Saturday morning for the pre-investigation interview. As I walked up to the front door, I felt as if all the energy was suddenly drained from me. Just then, something semitransparent shot from the house and passed the left side of my head. I felt like I was under attack and struggled to regain my composure as Mike Lebert opened the door to greet me. It crossed my mind to say, "Wow, your house is really haunted!" but I decided to keep it to myself, for now.

As the Leberts told me about their experiences in the house, I had no reason to doubt their sincerity after my experience at the front door.

I was impressed with what a charming family the Leberts are. It was obvious that they all loved and cared for each other very deeply. While not showing fear of what was happening in their house, they wanted to know what was happening to cause the activity. I agreed to have the G.O.N.E.R.S. Crew investigate to try to answer their questions.

During the course of the evening, we captured several EVPs in Macy's bedroom, sounding like an older male muttering something unintelligible. There also seemed to be a few animal like, guttural sounds we could not readily identify until Macy gave us a clue about these later in the evening.

During a recording session in Macy's room, with Karen and Melanie, Karen asked for whatever was in Macy's room to knock on the wall in response to her knock. After Karen knocked on the wall, a few seconds later a knock responded. We recorded an EVP of an older, male voice that asked, "Is that good?"

At exactly the same time, Mike Ahern and I witnessed a black shadow figure shoot past us and up the stairs to where Karen and Melanie had just heard the knock.

By far, the most dramatic moment of the investigation came as Karen was conducting an EVP session with Mike, Carrie and their two girls in Mike and Carrie's bedroom. Karen asked Macy if she wanted to ask anything of the spirit.

Macy asked, "Is it you who turns on the light in my closet?"

All present heard an audible reply, "Yessssss." (Because it was audible, Karen thought the reply might be noise from downstairs and said so.)

Just then, there was a loud bang in the closet and the same male voice responded, "No it wasn't!" (We assume meaning it wasn't from downstairs.)

Karen then asked, "Why do you hang around Macy's room?"

The male voice replied in what can only be described as a lecherous and almost sinister tone, "I like her…"

All this was captured on audio and video.

There were several other very relevant things Karen was able to sense during the evening, including the spirit of a boy who had died years before when he fell from a nearby water tower and was occasionally near or in the Lebert house.

Upon returning home one evening in her car, Macy saw the figure of a man in the garage. At first she thought it was her Father, until the figure suddenly vanished.

At one point, all the hair brushes had gone missing in the house. After a few days, they were found neatly stacked in a corner of Kelsey's closet.

Perhaps the most troubling:

Macy also reported to us that she had heard pig like sounds of an animal grunting, coming from her closet, on several occasions.

Such sounds have been known to signal the beginnings of possession.

During another EVP session in Macy's room, with the girls, Karen and Kurt, the temperature of the room suddenly became very cold. Kelsey became physically ill, was close to losing consciousness and had to be helped to the bed to lie down. She was shaking from the cold as Karen took a bottle of Holy Water and made the sign of the cross on her forehead. Karen then said a prayer, asking that whatever had been harassing the family to leave them alone, as she sprinkled Holy Water around the room. Kelsey seemed to feel quite a bit better after the blessing and said so.

At the reveal a few weeks later, the Lebert family took the results of our investigation very well. I told them of my experience when I had first approached their house and Carrie revealed something to me. Just the day before she had mentioned to her Mother in Law that the G.O.N.E.R.S. Crew had investigated their house, to which she replied, "Oh Carrie, I've known your house is haunted for a long time. About ten years ago I was babysitting the girls and I saw an old man standing at the top of the stairs, then he just…….disappeared! I never told you and Mike because I didn't want to scare you."

The finding of the leg bone by the girls and the disturbance of the Native American grave may have been the trigger which set off the activity in the house. Although the haunting does not seem to be Native American, it is possible that the spirit of the old man was either disturbed or somehow energized by that incident. Kurt has Native American ancestry and before leaving, performed a healing ritual in the woods behind the Lebert house, with sage and an eagle feather, asking the spirits of the Native Americans to watch over the family.

Since then, things have been calm at the Lebert house.

We classify this case as an intelligent haunting, with possible demonic undertones. Most often, we only get a few simple answers to question while conducting an EVP session, if we get anything at all. In this case, Karen was actually able to have a short conversation with the spirit; we believe to be of an older male. Also, all responses were audible to all the people present, something that occurs very rarely.

1Doppelganger: A duplicate of a person, somehow manifested in an area of intense paranormal activity.